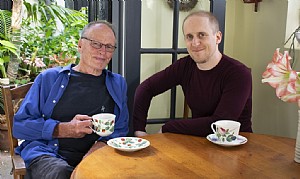 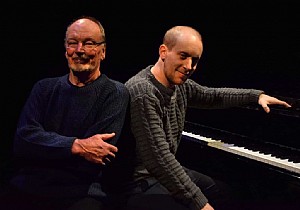 Duration: approx 75 minutes with no interval.

‘Words and Music’ brings two icons of Australia’s theatre and concert stages-the inimitable John Bell and extraordinary pianist Simon Tedeschi -in a sneak peek into life 'behind the curtain'.

Enjoying decades of celebrated performances between them, John and Simon take the audience into their confidence and share some wicked backstage stories from the Opera House to the Concert Hall, alongside some of their favourite pieces of poetry and music from recent years and their shows together, such as Bright Star, Enoch Ardenand Echoes of the Jazz Age. With notes (both literary and musical) from Mozart and Beethoven, Schubert, Keats, and Scott Fitzgerald, topped off with some sizzling jazz, don’t miss the promise of a delightful and entertaining afternoon with two of Australia’s best-loved artists.

‘Words and Music’ is a surprise package with something for everyone!

John Bell AO OBE is one of Australia’s most acclaimed actors and directors, founder of the Bell Shakespeare Company, and has achieved several honours including
numerous Helpmann Awards and Sydney Theatre Awards and nominations plus a number of prestigious Lifetime Achievement awards, including a National Trust Living National Treasure award.
Simon Tedeschi is one of Australia’s most renowned classical pianists, recipient of the Young Performer of  the Year Award and a Centenary Medal (Australia), the Creativity Foundation’s Legacy Award (USA) and a first  prize in the Royal Overseas League Competiton (UK).
Remarkably versatile across genres, Simon performs as
soloist with major orchestras, from Sydney Opera House children’s theatre to shows with John Bell, from regional towns and conservatoriums to Abu Dhabi, Shanghai and New York’s Carnegie Hall.
Buy Tickets Here
« Return to Concerts