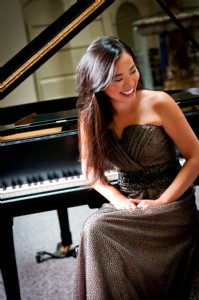 The Sonata: Mapping the emotions in music

“The Sonata is not a definite form like a minuet, a da capo aria, or a French overture; it is, like the fugue, a way of writing, a feeling for proportion, direction, and texture rather than a pattern.” (Charles Rosen)

Since making her orchestral debut at age thirteen with the Sydney Symphony Orchestra, Andrea Lam has given performances with orchestras in Australia, New Zealand, the United States, Japan, and Hong Kong and performed with many of the world’s leading conductors. Pronounced a “real talent” by the Wall Street Journal, New York-based pianist Andrea Lam is earning consistent acclaim as a soloist, recitalist, and chamber musician for her “great style and thrilling virtuosity” (Sydney Morning Herald). A frequent guest at major US venues such as New York’s Carnegie Hall and Lincoln Center to Australia’s Sydney Opera House, Andrea’s performances are noted
internationally for her “melting lyricism, filigree touch and spirited eloquence” (The Australian).