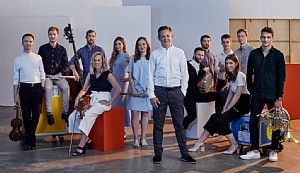 "BOLD BEGINNINGS"
an intriguing program of chamber works and arrangements.

Now in its 18th year, the Sydney Symphony Fellowship is recognised as one of the world’s leading orchestral training programs, providing exceptional young musicians with an intensive year-long program of mentoring, performances, workshops, and immersion in the world of the Sydney Symphony Orchestra.

Bookending the program are two sets of arrangements. Purcell and Bach are well known Baroque composers, but in these arrangements we hear them with fresh ears - a brass trio performing music by Purcell, and a solo marimba performing a lute suite by Bach.
At the end of the program is Carl Friedrich Ebers’ arrangement of Beethoven’s First Symphony, which followed the 19th century custom of publishing chamber arrangements of popular symphonies to allow them to be heard in smaller settings outside the concert hall.
Iain Farrington has continued this practice into the 21st Century with his arrangement of Humperdinck’s Hansel and Gretel Overture.
Benjamin Britten’s Sinfonietta is a mini symphony for eleven players and was his first published work, establishing the young composer as a major force in British music.
A short work for solo percussion by well-known Australian composer Matthew Hindson is paired with Street Sketches by Peggy Polias, an emerging Australian composer whose work explores the relationship between popular and classical music.